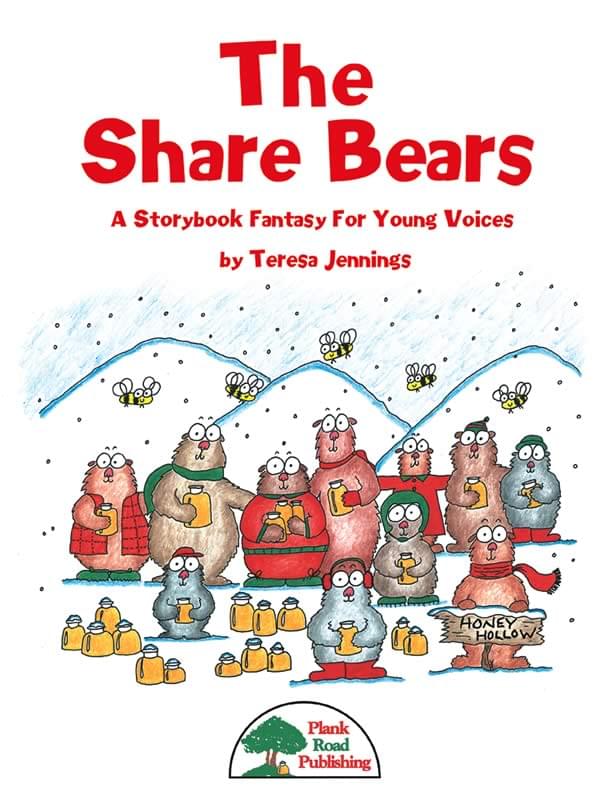 A Storybook Fantasy For Young Voices

Once upon a time, there was a very kind and generous bear named Bailey. He lived in Honey Hollow with lots of other bears. He was friends with everyone there, including the bees. The bees liked Bailey so much that they made lots of honey for him.

Every year, just before the first snow, Bailey shared his honey with all the other bears, who were very grateful. One year, Bailey gave out all the honey he had, except for one pot, which he kept for himself.

That year, just after all of the other bears had begun to hibernate (with tummies full of honey), there was a knock at Bailey's door. It was Little Bear, who came from over the mountain. He was cold and hungry, so Bailey gave him his last pot of honey... and his bed. As the snow started to fall, Bailey was the one who was cold and hungry - with no place to sleep.

As it sometimes happens, a magical wind began to blow. It woke all the bears who then found Bailey in distress. They hurried to help him, but he was reluctant. He had always been the one to give. But the bears were persistent and convinced him to allow them to be generous, too! After all, they had learned it from him. And so, Bailey learned that when he shared, his generosity came back to him. And all the bears in Honey Hollow - including Bailey - became known all over the mountain as... The Share Bears!

By popular demand, Teresa Jennings has created a primary, non-Christmas musical that is great for any school's winter performance. As with all of Teresa's musicals, it carries a valuable message and comes with everything you will need to produce a memorable performance.

This wonderful musical is populated with three (or more if you like) narrators, a group of bears, a group of bees (who speak in "buzzes" and join one song with kazoos), and The Magical Winter Wind. It works well with groups of many sizes, and can be set very simply or elaborately, if you like.

The Share Bears includes five original unison or call and response songs that are fun to sing and ideal for young voices. They include:

These songs and several clever pieces of background and action music are featured in piano/vocal arrangements in the Teacher's Handbook and with rich, professionally recorded orchestrations on the state-of-the-art audio tracks.

The Teacher's Handbook also features a full script, detailed performance notes, suggestions for costuming and sets, and even reproducible posters and a program cover.

About the Downloadable OptionThe downloadable version contains all the components the print version would, but in electronic format. Files may be quite large: A high-speed connection is recommended. Questions? Click to open the Download Help page in a new window.

A Rainbow Christmas - Kit with CD

From The Inside Out