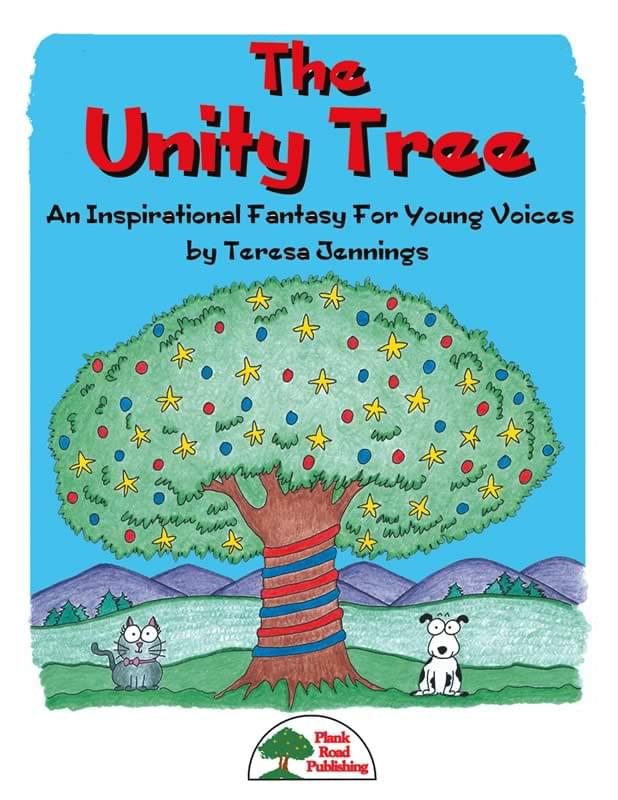 An Inspirational Fantasy For Young Voices

Teresa Jennings has created a meaningful, non-Christmas primary musical about love, understanding, and acceptance. Though it's great for any school's winter performance, it works well any time of the year. It can be performed with groups of almost any size. As with all of Teresa's musicals, it carries a valuable message and comes with everything you will need to produce a memorable performance.

A prominent tree with a large, vertical stripe right down its middle forms a distinct boundary between Catville and Dogburg. Alas, more than just the tree separates these two villages. Longstanding prejudice and intolerance dwell there as well.

Ironically, both Catville and Dogburg share at least one common characteristic: Their population is replenished during the occasional snowstorm in which it literally snows cats and dogs. Following one such snowstorm, a new kitten and puppy find each other before they find their "own kind." Being ignorant of the way things are "supposed" to be, they form a quick friendship. When the other citizens of Catville and Dogburg discover the alliance, they are appalled. They hasten to teach the young kitten and puppy that they're supposed to be enemies - a tradition not to be questioned. Immersed in their closed-minded perceptions, the cats and dogs fail to notice that the kitten and puppy have slipped away to meet again. When their disappearance is noticed, both villages rise up in anger, swearing their youngest citizens have been dognapped (or catnapped) by the other. Only when the two youngsters return on their own, obviously happy and unharmed, do the antagonists calm down. The kitten and the puppy proclaim their friendship. They powerfully state their case (in song) that such a bond is possible for the others as well. Living and working together in harmony, helping each other through adversity, and sharing ideas and solving problems turns out to be an attractive alternative to all of the cats and dogs. They decide to set aside their prejudice and intolerance, and to embrace their differences. The vertical stripe is ceremoniously removed from the prominent tree and a new sign is attached which reads, "The Unity Tree." The cats and dogs shake paws and join together to decorate their newly formed Unity Tree (in red, white, and blue, of course!). The boundaries have been blurred, and now they stand together, united.

The original songs include:

These songs are featured in piano/vocal arrangements in the Teacher's Handbook and with rich, professionally recorded orchestrations on the state-of-the-art recordings. The Teacher's Handbook also features a full script, detailed performance notes, suggestions for costuming and sets, and even reproducible posters and a program cover.

About the Downloadable OptionThe downloadable version contains all the components the print version would, but in electronic format. Files may be quite large: A high-speed connection is recommended. Questions? Click to open the Download Help page in a new window.

Song Title
Audio
It's Snowing Cats And Dogs!
First Dialogue
Let's Play
Second Dialogue
Just The Way That It Is
Third Dialogue
You'll Be Sorry
Fourth Dialogue
I'd Rather Be Your Friend
Fifth Dialogue
United We Stand

A Rainbow Christmas - Kit with CD

From The Inside Out